A lot could be written about the properties of this mineral and in superlatives. It is called interchangeably ”rock of life”, ”natural filter”, ”miracle of life”. It was first described in 1847 in the city of Montmorillon (hence its name). 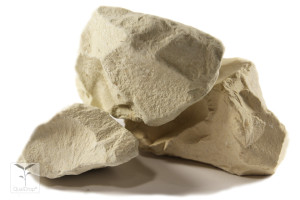 Montmorillonite is a natural mineral from the smectite group belonging to the class of layered silicates. This mineral is an impressive wealth of various elements.

To date, more than 78 all-natural micro and macro elements have been identified in Montmorylita. It contains, among others, calcium, iron, magnesium, potassium, manganese and silicon, as well as many other elements found in trace amounts, among others. titanium, manganese, zinc, boron, selenium, molybdenum, fluorine, iodine and others.

Montmorillonite, thanks to its three-layer structure and countless pores, also brilliantly improves the water quality in the aquarium. It absorbs organic substances and has a very high cation exchange capacity. Perfectly removes heavy metals as well as NH4 + ions . Therefore, it is preferable to use Montmorillonite during the maturation of, for example, shrimp tanks. Below are electron microscope photos showing the amazing structure of this mineral.

How to use
We recommend approx. 100 g per 50-70 liters of aquarium water. Can be placed directly in the aquarium in one or more pieces or as an addition to the filter. The mineral will retain its properties for about 4-6 months. Then it must be replaced.